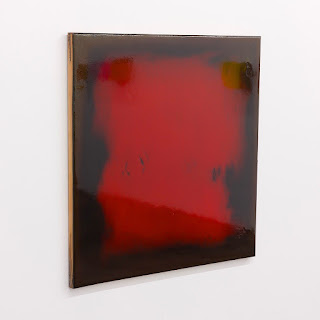 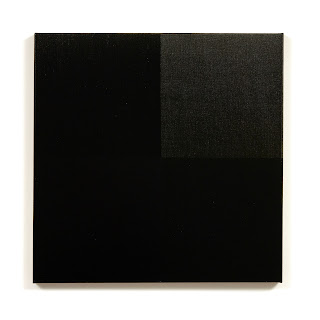 The paintings in Whole and Two Halves came to fruition after completing Yellow Ochre Room, a 52 - metre long wall painting installation at Christchurch Art Gallery in 2015, which remains on view until the end of April this year. The making of these works also coincided with the artist moving his studio from Lyall Bay, Wellington into town. The shift from one working space to another went hand in hand with determining a starting point, reconciling materials at hand and utilising them as integral to the development of new work. Simon describes tliis process:


"These paintings react to light. The reflective surface both reveals and conceals colour and material. Daylight is synchronised with the viewer's movement. These paintings are spatial. Like Yellow Ochre Room, there is a division of space in the painting. In Christchurch the gallery was divided into 19 parts with the yellow ochre colour reducing systematically from opaque saturated paint to clear paint revealing the white wall surface. In A Whole and Two Halves, through three simple applications space divides, and colour accumulates. Gravity is an essential part of the process, dispersing pigment over time creating edge and shape. The same system has been used in each work, however shifts in format and colour resolution create experiential readings in time and space".


Simon Morris was born in Hamilton in 1963 and lives and works in Wellington as a Senior Lecturer at the School of Art, Massey University Wellington. He completed a BFA from Canterbury University in 1985, followed by a Masters degree in Fine Arts from RMIT University, Melbourne in 1997. Simon Morris is an Abstract painter. He has worked with geometric structures for over twenty-five years exploring how line and colour operate in architectural space, and on the canvas informs new aesthetic understandings of space and time. He takes a reductive approach, making works in which a self-imposed set of limitations interact with the particular ground of painting. Sometimes he makes object based paintings such as the work in this exhibition, and at other times his interest in abstraction is explored through site specific installation or collaboration with other people. Wall drawing projects such as Contact: Artists from Aotearoa New Zealand, at the Frankfurt Kunstverein in 2012, and more recently Yellow Ochre Room in 2015, commissioned by Christchurch Art Gallery, and Black Water Colour Wall Painting at 11am School of Art Gallery, with accompanying catalogue text by Martin Patrick, expand the experience of a painted work through an engagement with architectural and social space. In 2007 Morris was involved in two major collaborations with internationally renowned Athfield Architects completing Rainscreen for The Dowse Art Museum, followed by Light in Space, and Space in Light commissioned by Otago University.

Simon Morris was awarded the Fulbright Wallace Art Trust Award in 2016. This prestigious prize offers a three-month residency at Headlands just north of San Francisco in the Golden Gate National Recreation Reserve. Simon will be taking the residency up in July this year. 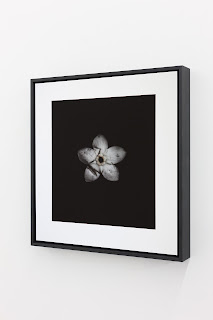 This is the second Roberta Thornley piece that we have purchased.


See 2011 posts for further info about the artist.

Andrew Blythe is a self-taught artist whose work is supported by Toi Ora Live Art Trust, a community arts centre providing studio space and tuition for people who have experienced mental illness.
A turbulent adolescence saw Blythe in and out of hospital as well as living rough on the streets of Auckland. During this time he would draw with pencil and Indian ink as a cathartic expression of his experience.

Blythe presented his first solo show at Satellite Gallery, Auckland in 2008. That same year he showed at the New York Outsider Art Fair where long-time supporter and promoter of outsider art in New Zealand, Stuart Shepherd, introduced him to Phyllis Kind - trustee of the American Folk Art Museum and a gallerist renowned for her discovery and support of self-taught artists.

Andrew Blythe's international recognition has grown steadily, with works being bought by collectors on both sides of the Atlantic, including the Sackner Archive of Concrete Poetry in Miami. The Chartwell Collection and the James Wallace Arts Trust have also acquired works. A Paris show in 2009 was followed by a second presentation at the New York Outsider Art Fair in 2011. Until September 2012 his work can be seen in Local Knowledge: art graphique de Nouvelle-Zelande at MADmusee de Liege, Belgium

Articus
We are a group of soon to be art lovers joined by a shared objective to learn about and build an art collection.